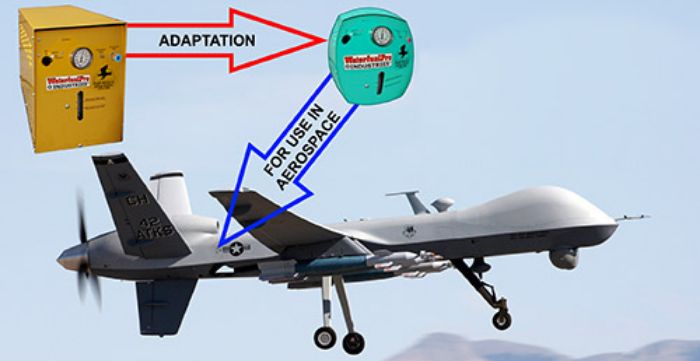 Here we have opportunities in selling this unique IP (intellectual property) to multiple AEROSPACE and MARINE INDUSTRIES.

In this case we only sell IP because the adaptation looks nothing remotely like any Brown’s gas machine the world has ever seen, and it also must be further adapted by the airplane or rocket manufacturer to their current designs and future modifications.

It’s also useful in many marine applications, especially military, water racing and wherever rough seas is the norm rather than the exception.

What Problem Does it Solve?
As much as we admire the great variety of Brown’s gas machines and systems invented (and some but not all Patented) since 1916, non of them would fit truly harsh environment. Harsh as in crazy-harsh such as a rocket or torpedo, speedboats, and especially aerobatic airplanes; many of the warbirds made today such as the American F15, the Russian MiG 35 and the Chinese J-10, which are highly aerobatic in the sense that their maneuverability and such high G limits that would have challenged some of the better pilots of yesteryears.

You get the idea. Crazy motions through the air/water, which would render any “normal” Brown’s gas unusable, nonoperational and possibly damaged permanently. Yes, we’re aware of the ,many, many designs out there. They are great. But this is not about a cell design or a water reservoir design, but a completely revolutionary design in its SYSTEM LEVEL concept, structure and capabilities – because it has been invented from the ground up by our Ozzie Freedom who is not only an innovator but also an aerospace professional since 1971, and an aerobatics national champion (model airplanes, Israel, 1973) that has dealt with the challenges of this particular industry on countless levels including military ones (airplanes, guided missiles, unmanned flight, more).

Can we prove any of its proclaimed capabilities today? No. And the Pending Patent is currently heavily guarded so nothing more can be said at the time of writing. You either make your own evaluation based on the disclosure given in this page, or skip it and deal with out more conventional projects.

This electrolyzer is not a “new type of cell” or some simplistic description like that. As the word “Encapsulate” in its name may hint, the structure is made of encapsulated structures; think of those Russian dolls… well, sort of. It is a structure that encapsulate an electrolyzer and a whole lot more inside and outside of it and even THROUGH it – all for the purpose of not only surviving crazy maneuvers but also managing to produce Brown’s gas efficiently no matter where the orientation of the airplane/rocket, or how rough the sea waves that rock the ship, yacht or speedboat, or even submarines and torpedoes.

It just continues to produce gas at duty cycles exceeding 90%, in other words provide the engine with Brown’s gas nearly all the time it needs. Since the assisted engine continues to operate on its fossil fuel, its operation is never interrupted, and furthermore the cleaning effect of Brown’s gas is practically just as good as if gas supply was 100% of the time.

We understand you want to know more, to take a sneak peek into the machine. Yes, that is fully understood. But revealing more data at this point may ruin so many jobs that we cannot do it. Patience is golden here. We’re not asking for money, orders, or more than a faint belief that there’s something there based on our background.

At the time of writing, February 2019, we have a crude prototype that requires final development, lots of 3D printing, gyroscopic rigs and other wizardry. This will take roughly 4 months.

Another 2 months are expected for rigorous test flights with data recording to be flown by Ozzie and his pilot friends at permitted airfields such as Yonghe and Xinzhuang in New Taipei City. The usual cycle of debugging, modifications, remodeling and retesting, you know the score if you’ve ever done such R&D.

Another couple of months will be required for the legal work.

The IP is expected to be ready for initial sale no earlier than 15 months after we start production in Taipei, with further adaptations to our initial clients’ requirements between Months 20-27, with most of the negotiations commencing around Month 22 onward.

Although these time frames are crude and preliminary, a lot of research, planning and detailing has been given to come as close to accurate prediction as possible. The wild card, however, is pricing.

The pricing of IP will vary widely per the client’s needs and by contact terms. As a broad generality – and broad generality only – here are two levels of pricing for IP licensing of this project:

$10-15 MM, exclusive rights; by “exclusive”, again, it may refer to the entire technology for both aerospace (including space/regular rocket engines) and tough marine applications, or it may mean exclusive to a niche or niches the clients is involved in, e.g., speedboats. So this, too, will vary by needs and contracts.

Who is Needed Today?

And if you’re considering this even remotely, you must have (1) patience, and even more so (2) great attention to detail, and finally (3) professionalism.

The above description is as close to a disclosure as we can get at this time.

Nothing is “secret” and you can talk to anybody you want about it without prior permission from WaterfuelPro. You found this on an open web page.

However, if you talk to potential clients, they WILL ask you for more information, and there is none that can be released. Not yet.

So try to wrap you head around that and evaluate what kind of deals can possibly be struck. Do what we did and give it your best research, look into the details that ARE available and connect the dots as much as possible.

[this would be your statement] “Provided that this project comes close to its preliminary claims, we consider it possible to sell licensing of this IP to {Boeing, Lockheed Martin, Space-X, etc.} for their {whatever} division. May be looking at deals starting {whatever numbers} of millions between the years XX and YY.”

You get the concept. It’s true that you’re getting little data here, but that’s how it is in many early negotiations involving innovative tech. We cannot release more yet. See what you can bring to us despite data scarcity. As explained in the B.E.A.R. Presentation, we actually do NOT want to know the names of your clients. Just the framework of potential business, with estimated time frames.

We aim at any range (price wise) of professionals in the aerospace and marine industries. No toys and $2,000 products. They are too small to pay and their crafts do not need this IP anyway. The list below should not not limit you in any way, it’s just an initial mind-jogger, a starting point: